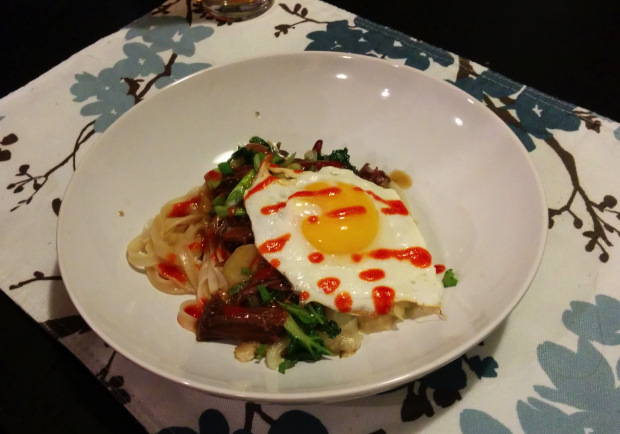 After using the bones of the beef short ribs for this amazing broth, I wanted to cook the meat slow and long so that it will still be so juicy! I served this when we had a few friends over and with the fried egg on top, it is a a hit for a crowd!

Sear seasoned short ribs on medium high on each side until the juices are sealed in and the meat is browned.

Add in all the other ingredients, and throw the whole thing in the oven for 2.5 hours. Sit back and enjoy the smells.

After the meat is done, remove from oven and let cool slightly. Strain sauce into a bowl and put back into pot/dutch oven, adding in corn starch. Bring to boil and simmer over low-medium heat and cook until about half of the liquid is left.

Once the meat has cooled, shred with two forks and return to pot with sauce. Turning heat off.

Fry chopped bok choy with garlic/ginger until garlic is quite fragrant. Add in broth, cover and reduce heat to low.

Cook rice noodles and toss with a few spoonfuls of sauce from the meat. Add into a bowl to plate, adding in bok choy, shredded short ribs and sauce and finally the egg. Use the Sriracha sauce and green onions as the garnish.

I am always in pursuit of the perfect bite. This blog is a collection of recipes and dining experiences from around the world ready to inspire the chef in all of us.


Find out more about Hilary, the girl in pursuit of the perfect bite.